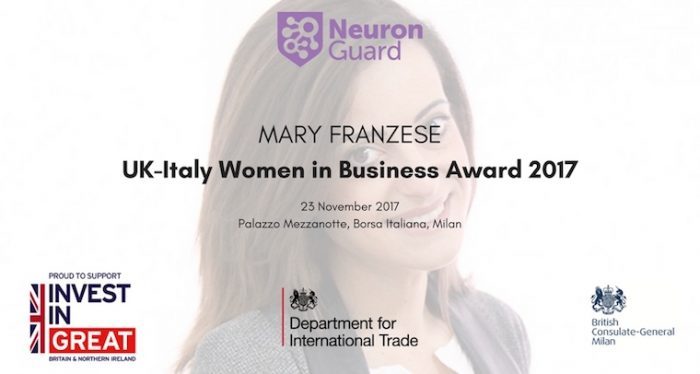 Milan, 23 November 2017 – We are honored to announce that our cofounder Mary Franzese has received the “UK-Italy Women in Business Award 2017” for her commitment in women entrepreneurship together with the great scientific and technology value that Neuron Guard will bring to the British economy.

The Awards recognizes the Italian excellence in culture and technology innovation that have chosen the UK as a key market for their future international development, bringing high quality investment to the British economy, renowned for its openness to business.

She had also the chance to present Neuron Guard and her involvement in the female entrepreneurship community. We are pleased about the interest they have showed in what we are doing with the United Kingdom, in particular with the Brian Injury Healthcare Technology Cooperative, University of Cambridge, Cambridge University Hospital and TWI.

“I am very honored to receive the UK-Italy Women in Business Award. This acknowledgement represents the perfect depict of the outstanding work we are doing in Great Britain in transforming our prototype in the next standard of care for the early and on-site care of brain injury” Mary told after receiving the Prize.

A very warm thank you to the Department for International Trade and the British Consulate-General in Milan for making this possible.